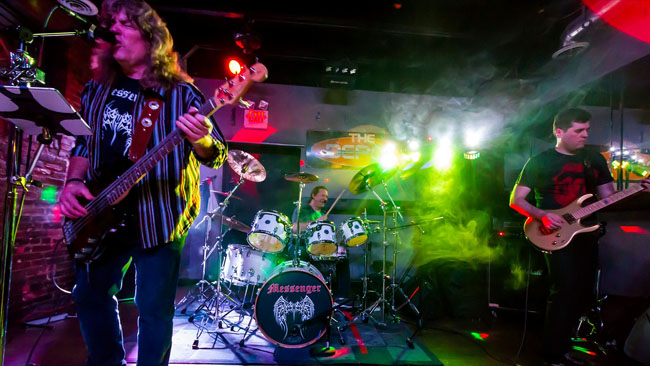 Messenger is an original Hard Rock/Heavy Metal Band with a strong message. Frank Clifton Herring started as a solo act producing two studio efforts; an EP called ‘Let My People Go’ with two musician friends and then a self-titled album, ‘Messenger’, on which he himself played or programmed all of the instruments.

He then formed Messenger in 2008 together with Vlad Gurin, formerly a Sony signed artist with the Moldovan band AGNY. They have produced 3 studio albums with positive reviews; ‘I’m Talking To You’, ‘You Choose’ and the latest, ‘In To Win’. Drummer Michael John Hoover joined the band in mid-2017.

The Messenger sound arises from Hard Rock, Heavy Metal and Progressive Rock influences that stretch from Black Sabbath to Rush to Alter Bridge. The storyline lyrics of their songs are set in ethereal and complex style music, though sometimes simple and bluesy rock.
They perform live at festivals, fairs, theme parks, events and venues of all kinds, indoors & out. They bring a great show with good music and loud guitars. They have found internet & broadcast radio airplay in North America, South America, England, Australia, Cyprus and Greece.