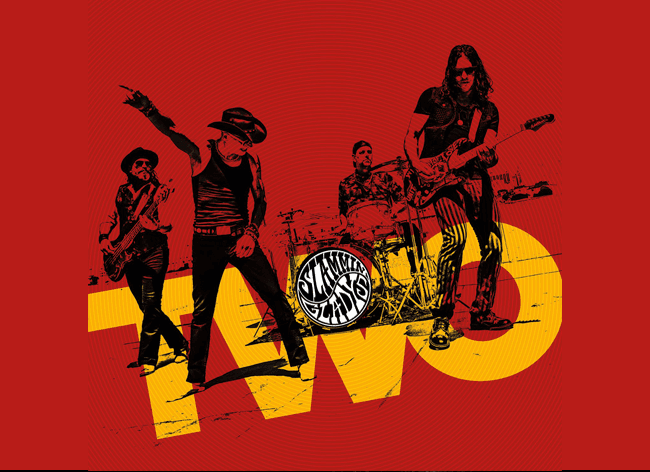 Nothing upended the hierarchy of rock music quite as dramatically as the emergence of grunge. Seemingly overnight, all of the bands we knew and loved from the ‘80s and early ‘90s were out, and new faces were in. But in retrospect, it’s easy to see that not much changed. Loud guitar, impassioned vocals, and tight, forthright, emotional songwriting never went out of style. And Slammin’ Gladys always had all of those qualities in spades.

So even if they didn’t look the part of the alternative revolution, they had a sound that was designed to move the crowd in any era. And as new tracks Dragon Eye Girl and Hold Up My Blue Sky” demonstrate, that sound – a scalding-hot alloy of rock, dirty blues, wonderfully sleazy pop-metal, classic ‘70s glam stomp, funky pure party music – is very much intact. Years after their self titled major label debut, the Ohio-born, Los Angeles-based band is back with fresh material, and it’s clear that their skills, and their intensity, haven’t receded one bit.

If anything, the new Slammin’ Gladys is tighter, more ferocious, more menacing, and more playful than the original version – and that original version hit hard. This time, they’re not running into the wind: there’s a demand for music that swings as hard as it rocks, and TWO, their upcoming nine-track comeback album, is designed to meet it. Frontman Dave Brooks still roars like a beast breaking its chain, guitarist J.J. Farris’s six-string stings, slashes, and lays down a mean strut, and bassist Al Collins and drummer Stephen DeBoard lock into grooves that shimmy and shake without ever sacrificing an ounce of power. This is hard rock you can dance to, drive to, and make a mess to, and it’ll be out next year on the fiercely independent Jib Machine Records. The indie imprint sought them out in 2018, encouraged them to record again, and, most importantly, turned them loose.

For those who know and love Slammin’ Gladys, the 1992 full-length that established the quartet as a band to watch, all of this will sound pleasantly familiar. That album, which was executive produced by Jani Lane of Warrant, was marvellously lascivious and wildly catchy and is now rightly regarded as a landmark of underground ‘90s groove-rock. The group barnstormed across the country to support the album, earning raves from Metal Edge and launching a music video into regular rotation on Headbanger’s Ball.

Only a major industry sea-change could have derailed momentum like that, and Jib Machine Records is proud to give back what the vagaries of history took away. They’ve placed J.J. Farris in the producer’s chair – and he’s locked the door and hasn’t let anybody interfere, for any reason. What you’re getting is the purest Slammin’ Gladys experience ever: the sound of four accomplished musicians, each of whom complements the strengths of his mates, playing with absolute authority and wicked glee. It may have taken a while, but the band’s time has finally come.